2017 in retrospect – Unforgettable Gospel Events and Concerts that Characterised the year.

The year 2017 has been a great one with regards to rise of gospel music in Ghana coupled with the stirring up of passion in most young ministers as well to work harder. As we end the year 2017, it’s prudent for us to look back and remind ourselves of some of the awesome moments we have enjoyed in the gospel fraternity in 2017.

Joe Mettle, after beating E.L, Sarkodie, Stonebwoy, MzVee, and Medikal to claim the utmost rights as Ghana’s topmost artiste in 2017, made history as the first Gospel artiste to have won the prestigious VGMA artiste of the year awards since its inception in the year 2000. Sonnie Badu, other top gospel artistes and the whole community of gospel music lovers rallied behind Joe Mettle to make history in 2017.

While some in the secular music world think Joe Mettle did not deserve or even meet the award requirement, VGMA board and friends from the gospel industry debunk these claims and have embrace this as a step in right direction for gospel music in Ghana. Joe Mettle therefore believes that winning the award has opened the gate for others in the gospel fraternity to win more in the years to come.

The maiden edition of the National Gospel Music Awards, an award scheme set aside to appreciate gospel music in Ghana has seen many talented and anointed gospel musician being awarded on the night in various Categories. Ultimalety, the gospel songstress, Obaapa Christy emerged the artiste of the year.

It was a stiff and tight competition she held out against the likes of OJ, Joe Mettle, Akesse Brimpong, Gifty Osei, Diana Antwi Hamilton and Brother Sammy. 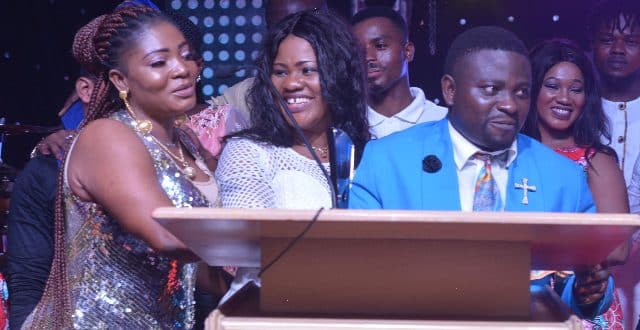 We cannot talk about the year 2017 without looking at some of the powerful and awesome worship events that had been organised within the year. So starting from the top, Harvest Chapel International have not cease to treat us to some good gospel music on Easter Fridays. This year’s edition of Harvest Praise had Todd Dulaney headlining the concert with support from Joe Mettle and the Harvest Choir. Attendance was great and worship was awesome.

KC entertainment and FootPrint TV also came through with the annual Next Generation Ministers concert. The 2017 edition dubbed Celebration of Glory saw young but anointed individual such as Carl Clottey, Japhet Adjetey, Curtis Quacoo just to mention a few, whom you can consider the next big thing in the gospel music industry in few years to come.

Joe Mettle Ministries also had their annual ‘Love Gift’ concert and this time round it was dubbed, ‘God of Miracles Live DVD Recording’. A lot of excitement and joy characterised the event as the VGMA artiste of the year treated the attendees to wonderful old songs, completely new songs and worship medley that are part of his new album. Ntokozo Mbambo Mbatha from South Africa,  Akesse Brempong and Ohemaa Mercy were artistes who supported Joe for the Live DVD recording.

Talking about Ohemaa Mercy, she has really gain a lot of respect by way of her annual ‘Tahilla Worship’ concert. This is so because, she has been able to consistently deliver and has uniquely taken worship to another level in the Talilla annual worship concert.

Nquebeko Mbatha headlined this years ‘Absolute Worship’, organised annually by E’mPraise Inc. Absolute Worship 2017, which was in Collaboration with the Ghana at 60 Planning Committee also had Minister Joe Mettle, Akesse Brempong, Francis Amoo, Selina Boateng, Cindy Thompson and Eld. Kwesi Mireku all leading the worshippers into an exciting time of praise and worship.

Stunning performances as well as lots of dissatisfaction characterised the maiden edition of the all women worship concert dubbed ‘Women in Worship’ held in September at the Perez Dome. Ntokozo Mbambo, Naa Mercy, Tagoe Sisters, Ohemaa Mercy, Diana Antwi Hamilton, Becky Boney all performed at the concert. Unfortunately to some with genuine concerns, this event did’t quite lived up to expectation.

Kirk Franklin, Cece Winans, Israel Houghton, Hezekiah Walker and Brooklyn Tabernacle choir are a few of the endless list of international gospel music greats who have graced the Adom Praiz stage over the years. As it is very characteristic of Adom Praise, lots of patrons throng the auditorium of Perez Dome to praise and worship God with what a call a Nigeria-Ghana line up of ministers. Preye Odede of Ebezina fame, Steve Crown of ‘You are great’ fame were the ministers from Nigeria joining the worship force with the likes of Joe Mettle, Ps Denzel Agyemang Prempeh, Francis Agyei from Ghana.

Lots of hyper-youths bounced into the auditorium like protons, but as the worship went on, the songs battered their souls like a castle under siege until their spirits poured out and tears flowed out like a leaky roof.

Well, let me conclude with ‘Kiss the King‘ Concert which had Multiplatinum-selling and award-winning gospel artist Dr Tumisang Makweya popularly known as Dr Tumi  headlining the concert. Such an awesome time in God presence as beams of worship power radiates from the ‘Nothing without you’ hit maker. Joe Mettle and his crew, Kofi Kakari and others also had their turn in this atmosphere of electrifying worship.