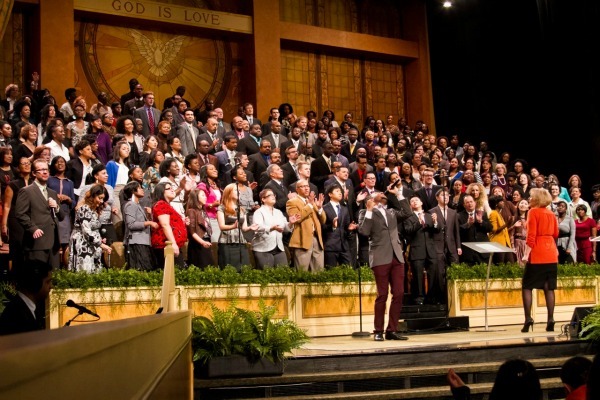 The thundering voice of a 230-strong choir is set to shock and shake the country when the peerless Brooklyn Tabernacle Choir (BTC) land in Ghana for Airtel Adom Praiz 2016.

There is no anxiety they cannot melt, no fear they cannot banish, no stony-heart they cannot crack into miserable pieces of submission, when the Brooklyn Tabernacle Choir lift up Jesus Christ in one melody.

You will see human beings on stage, but you will hear a roar that resembles the Lion of Judah.

That is what happens when ordinary people yield to the gospel’s saving grace and that is exactly will happen to you are blessed to get a ticket for Airtel Adom Praiz.

And so it was with great excitement, that the Airtel Adom Praiz team besieged the Adom FM studios to announce with raw child-like excitement that the BTC is coming to Ghana.

They have won five Dove Awards and six Grammy Awards, surely winning your heart, will be as spot on as David slung a stone at the 9-foot giant. It’s bull’s eye.

A choir that was no more than nine members in 1970, is now 230 at its strongest. Imagine the size of the congregation that troop to the Brooklyn Tabernacle Church?

And it is because of talented consistency, gifted perseverance in doing the same thing for four decades – 40 years.

After several editions, we have gotten to the stage where we can no longer discuss what is impossible for Airtel Adom Praiz to do.

For any novice to gospel music, you are only a youtube away from turning your living room into a throne room, if to type up Brooklyn Tabernacle Choir and watch until your knees give up, your heart gives in and the tears gush out in one prostrate posture of praise and worship.