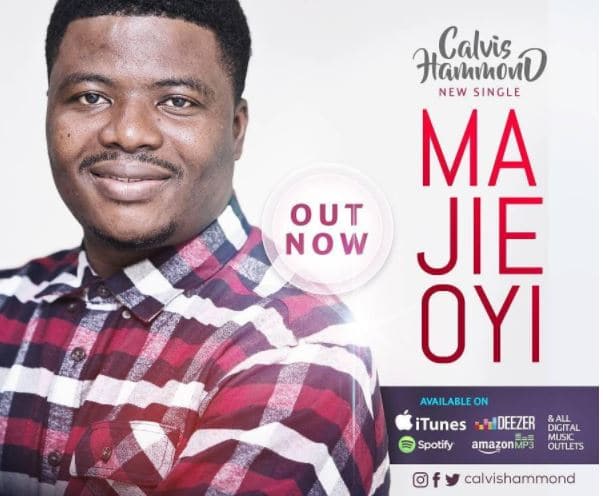 Calvis Hammond out with a new song ‘Majie wo yie’

One of Ghana’s finest contemporary gospel artist who has also featured on many big worship event stages, Calvis Hammond is out with a new song Majie wo yie, which mean I will Praise You.

The new song ‘Majie Wo Yie’ is part of his upcoming album project that will be launch during his upcoming event dubbed ‘Calvis Hammond live in concert’ on Friday 22nd September at Addae Kesse Hall, La Palm Royal Beach Hotel. The event will feature Naa Mercy and Koda.

In an instagram post, Calvis acknowledged Minister Eugene Zuta for the gift of this new song ‘Majie wo yie’ two years ago. According to Calvis, Eugene Zuta said he felt led by God to give him (Calvis) his newly written song and that he sees him more in the song. Calvis in his post was grateful to Eugene and referred to this act as rare.

The response to #MaJieOyi has been overwhelming. Thank you all for the feedback, prayer and massive support.  To God be the Glory.

Also say a prayer for my big brother Eugene Zuta through whom God gave us this blessed gift.
Two years ago, I woke up to see a message from him on Whatsapp, he had sent me a voice note; a new song he had composed. He said he was led to give me this song as a gift, as he could hear me more in it , and that I could record it if I was interested. My people, this is rare.

I took the gift he had bestowed, and kept it for two years. Somehow when I was ready to start my album project Ma Jie Oyi shot to the top of my list of songs. I contacted KODA, and the result is what we’re all blessed with today.

To have the world acclaimed Calvin “C’Rod” Rodgers who plays for my mentor Fred Hammond playing drums on this song is just surreal. Watch out for “God is Able”, also a gift to me from KODA.

‘Mayie wo yie’ is out now and can be purchased on major online music stores such as spotify, itunes, amazon etc..