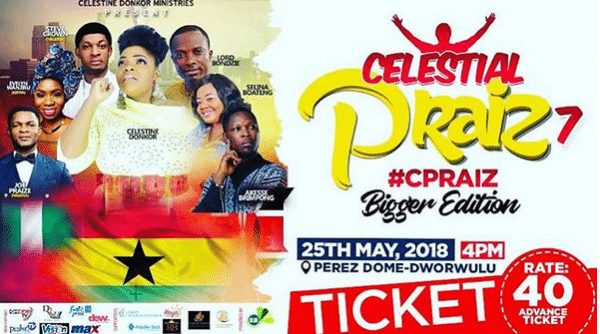 Past Event: Celestine Donkor ready to host the 7th Edition of ‘Celestial Praiz’

With growing audience and interest from the general public and most importantly gospel music enthusiasts, ‘Celestial Praiz’ which annually hosts anointed worshippers, comes off on May 25th at Perez Chapel Int. Celestial Praiz has entered its 7th edition and it promises to be ‘Bigger’ and Greater.

The event as always comes with great worship packages for patrons and as this year’s theme ‘Bigger Edition’ connotes,  worshippers will have such a time of intimacy with God, hearts will be drawn back to God and lives touched in a much more bigger dimension.

Celestial Praiz, since it’s first edition in 2011 has seen anointed ministers of God impacting lives through Word and intimate worship and this year’s edition is no exception.

This year’s edition will host Steve Crown, Joe Praiz all from Nigeria and Evelyn Wanjiru from Kenya.

Selina Boateng, Akesse Brimpong, Lord Bondzie, and Celestine Donkor the host will thrill patrons at the event with soul inspiring and spirit filled songs of praise.