The Ghana Pentecostal & Charismatic Council (GPCC) has called on the President to close down the recently opened office of the Lesbian, Gay, Bisexual, and Transgender (LGBT) Rights of Ghana.

According to a press release signed by the President of the council, Rev. Prof. Paul Frimpong-Manso, the council “views the action by the LGBTQI movement as an affront to our long-cherished Religious values, customs, and traditions as well as the laws of Ghana. The actions of the LGBTQI movement are also completely at variance with the laws of God as spelled out in the Holy Bible concerning God’s plan of creation and the sanctity of marriage between Man and Woman as ordained by God.”

The council continues that, though the church respects the right of persons in Ghana as a republic, it frowns upon the act of Homosexuality.

The Council in the release called “on the government to officially state its position without any equivocation on this new development and take immediate steps to: “Close down without delay the alleged LGBTQI office in Ghana and immediately arrest and prosecute the individuals or groups behind the alleged opening of this new office in Ghana for breach of the law and potential threat to peace.

“Summon all foreign diplomats who allegedly participated in the opening of the LGBTQI offices in Ghana to explain their violation of the sovereignty of Ghana.”

The European Union has been accused of supporting and sponsoring the activities of LBGT rights in Ghana despite opposition from some Christian and other religious organizations in the country.

The Executive Secretary of the National Coalition for Proper Human Sexual Rights and Family Values, Moses Foh-Amoaning, has recently waged a crusade for the shut down of new office space.

The Ghana Pentecostal and Charismatic adding its voice to the closure of the LGBT office urged “Parliament as the representatives of the people to summon the President’s Representatives at the Ministries of Foreign Affairs and Interior to explain to Ghanaians what actions they have taken in relation to this matter to protect the sovereignty and security of the state of Ghana.”

It also supported the call for “comprehensive legislation to deal with the LGBTQI issues in Ghana once and for all to settle any future controversies.”

The GPCC added: it is “very resolute in its stance against the LGBTQI movement and its activities in Ghana and is standing firm with all other stakeholders on this matter with the hope that government would take concrete steps to reassure Ghanaians of their unwillingness to succumb to pressure from some notable western powers to sell out our cherished values and to safeguard the future of our children from a perverse generation of vampires scheming to destroy us.” 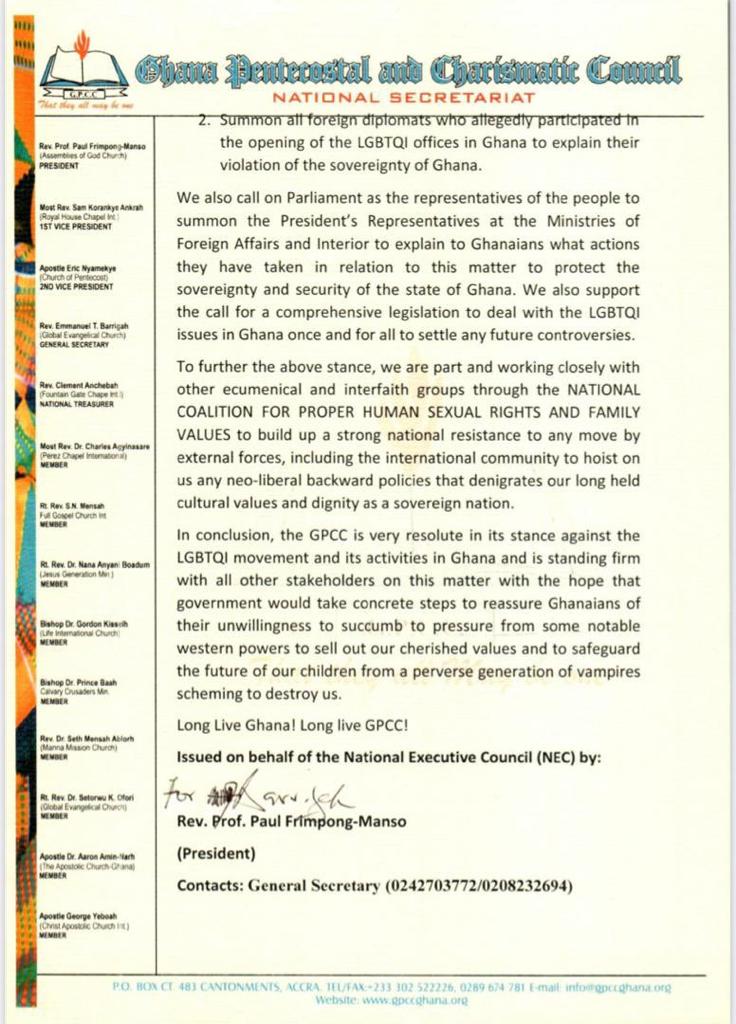