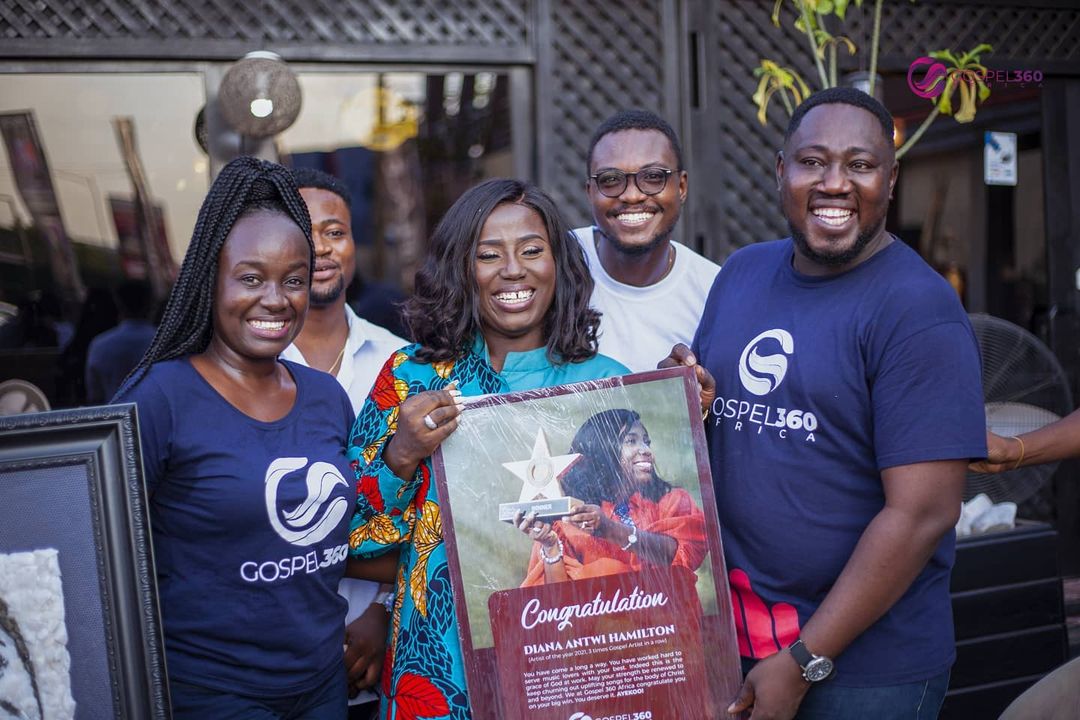 The recently adjudged VGMA Artiste of The Year, Diana Hamilton, the first female artist to have won the coveted price has been shocked after some top gospel musicians in collaboration with Gospel360 Africa organized a surprise party to honor her over the weekend.

“What’s going on here?” said Diana Hamilton as she was taken aback upon arrival at a restaurant in East Legon, Accra, Saturday.

The “Adom” hitmaker had been told about a meeting with some personalities only to get to the car park to see bloggers and some media personalities film her presence.

As she made her way to the entrance of the restaurant, she was welcomed by some melodious voices which turned out to be top gospel musicians who had come together to celebrate her for winning four awards at this year’s edition of the event, especially, the coveted Artiste of the Year award.

“What!” Diana Hamilton screamed as she was overwhelmed with shock. “Oh, my goodness! This is for me? This is so sweet.”

Speaking on behalf of the team, Reverend Yawson said: “We appreciate what God has used you to do. You’ve been a blessing not only to our nation but beyond the borders of our country. You’ve chalked a good name for God.

“Every household sings your songs and people are comforted, encouraged by your music, and on top of all, God honored you for your hard work. We are so proud of you. You have set a record of being the first lady to achieve this. Congratulations!”

On her part, Diana Hamilton expressed profound gratitude to the organizers, Gospel 360 Africa, as well as the participants. She was grateful to veteran gospel musicians who have mentored her directly and indirectly, including Mary Ghansah, Daughters of Glorious Jesus, and Tagoe Sisters.

She was presented with fabrics, citations, plaque, and artwork.

Diana Hamilton was on June 26, 2021, crowned Artiste of the Year at the 22nd VGMA. She beat competition from Adina, KiDi, Sarkodie, and Kuami Eugene. She is the first living female artist to have won the award.