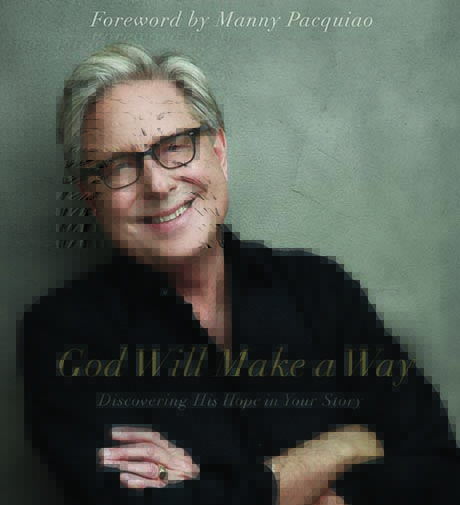 International multiple-award winning gospel star and renown worship leader, Don Moen is set to release his first book titled ‘God will make a way: Discovering His Hope in your Story’. The book is schedulled to be officially released on October 16th, 2018 by Emanate Books, an imprint of Thomas Nelson.

The book ‘God will make a way’, written with the popular biographer Robert Noland and featuring a foreword from World Champion Boxer Manny Pacquiao, throws light on the award winning song ‘God will make a way’ by Don Moen. It is a book of encouragement and hope for everyone to know God is still working and he does not forget about his beloved children.

“As I’ve traveled around the world, I’ve seen God work in countless ways, bringing hope to people who have lost hope. I have seen Him make a way where there seemed to be no way, and I’m excited to share many of these stories in my new book,” said Moen.

“We are absolutely honored to partner with Don on his first, groundbreaking book God Will Make a Way,” said Joel Kneedler, publisher of Emanate Books. “His fans will immediately recognize Don’s heart in the pages of this book. He is the ultimate encourager and storyteller.”

In the book, Moen uses personal experiences in order to bring hope alive in many who think they have lost it all, people whose preoccupation is doubt. The great lesson in there according to the legend worship leader, will show many that God is still making a way where there seem to be no way, the very God who parted the red sea in the days of old. That God is still working relentlessly.

Brief background About Don Moen you might not know of

Don Moen, a pioneer of the modern Praise and Worship movement, has spent his career as a worship leader, producer, songwriter, and music executive. Moen has sold over 5 MILLION records during his career.

While a student at Oral Roberts University in the early 70s, Moen began touring with the musical group Living Sound and evangelist Terry Law. By 1986, Moen had recorded “Give Thanks” for the Hosanna Music! praise and worship series at Integrity Music, where he would serve as creative director, executive producer, and eventually, president of the label.

During his tenure there, he sold more than 5 million units and signed worship leaders and songwriters, such as Paul Baloche, Ron Kenoly, Darlene Zschech, and many more. Today, Moen lives in Nashville, Tenn., with his wife, Laura, where he is president of Don Moen Productions and oversees his international nonprofit ministry, Worship in Action.