Renowned US-based Ghanaian Gospel singer and preacher Dr. Sonnie Badu recently poured out an endorsement for one of Ghana’s rising gospel singers Kofi Owusu Peprah, describing him as the next big thing to happen to Ghana Gospel Music.

The “Yesu Nyame ba” singer was invited by Sonnie to join a four hours virtual concert dubbed “Unveiling”, comprising of 25 up and coming gospel talents from other parts of the world, an event that streamed live on Sonnie Badu’s official Facebook page and YouTube channel last Friday, June 26. 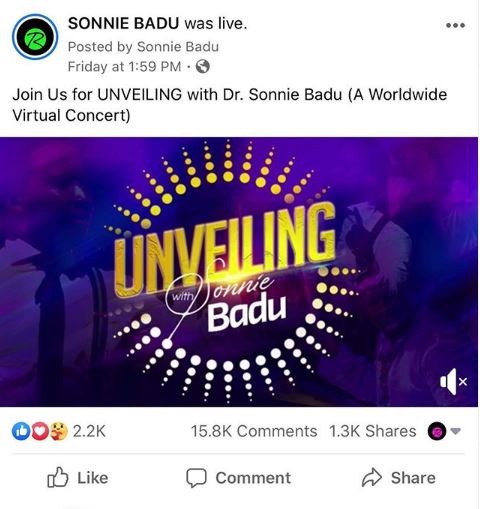 As a way of introduction, the “Pillar of Fire” singer described the situation for the call up of the young Ghanaian gospel talent as pure favour that has located him.

Dr Badu was fascinated by Kofi Peprah’s ability to perfectly sample and integrate his instrumental concept (which appeared on Okokroko) for a new and a better rendition of “Matwen”, a song originally composed by Kofi Owusu Peprah’s father.

“One of the reasons why I respect this young man is because of his father. His father wrote a song in Ghana, and this is a song everybody sings in the church especially the prophets in their churches when they need the glory of God to descend. And for me when legacies are re-ignited like that it means a lot to me, because it is a seed I am also sowing so my children will pick up my song and live with my songs. So When I saw this man minister, I kept on asking who is this guy. Now for almost 7, 8 years, he’s been looking to get into my band in Ghana and nobody has ever told me about him.” – Sonnie Badu noted.

Sonnie Badu describes the use of his instrumental concept by Kofi for his project as an honour and amazingly, he (Kofi Owusu Peprah) was frightened when Sonnie’s team contacted him to arrange his participation in the “Unveiled” virtual concert. Apparently Kofi Owusu thought he was going to be questioned or sued for that but it turned out to be a different story altogether.

According to Sonnie Badu, upon seeing what he has done with that song, he started following the young gospel singer on YouTube, ready to consume any new content he will post. Sonnie also noted profoundly that he could feel himself (his craft and style) in Kofi Owusu Peprah.