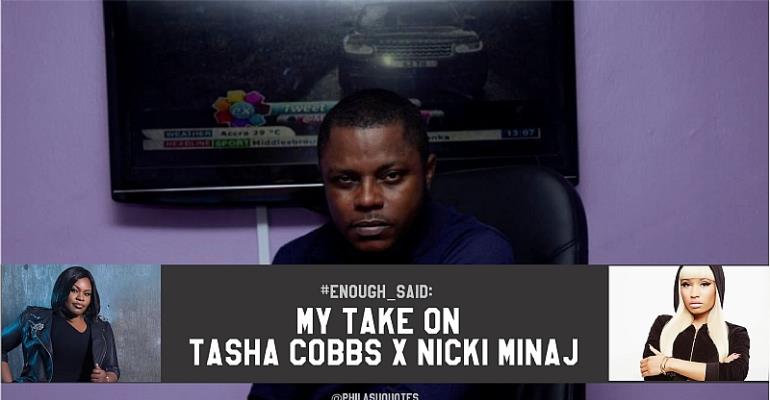 ***Philip Asuquotes is a strategy consultant and has been on the frontline in PR and Strategy consultancy for over 11 years now. AND HE OFFERS THIS INSIGHTFUL OPINION ON THIS MATTER.****

Just this August, news came out that Tasha Cobbs, the ‘Break Every Chain’ singer, had featured American rapper, Nicki Minaj on her new album and ‘hail yeah’, the internet broke lose over it. For days on stretch, people talked about it, castigated themselves, outrightly called out each other on posts to come argue over it, and yes, got angry and cussed out themselves online and offline.

I watched as my brothers in the gospel shared their views and often than not, the ‘Judge not’ parlance was thrown up and down in many posts. The issue was indeed a sensation and I must say, it seems to be tops of what has broken the internet this year for days on stretch.

Without getting into the argument of whether or not what Tasha Cobbs did by featuring Nicki Minaj is right or wrong, let me take you into some deep truths in God over things like this.

I will kick off by letting you in on the fact that I am someone that has worked with many kinds of artistes – the ones you call secular and those you call gospel artistes. As always is the case with me, I usually want to get to the core of anything I am involved in.

I have never liked the shallow sides of anything I get involved in. I have always preferred going deep into it to get to its root, objectives, etc. I understand that there is something behind everything. I go behind to see what that thing is so that when I come in front, I will see it as what it is, not as what it makes its self out to be or seem.

So, what’s up with the collaboration thingy between Tasha and Nicki?

I will tell you but before I do, we need to understand that Nicki is noted to have first called out to Tasha Cobbs two years ago after she watched Tasha’s performance on Sunday Best and had outrightly let Tasha know that she’d like to be featured on her album with the instagram post below:

“@tashacobbsleonard when you finish recording the album, come to my studio so I can put a 16 on one of these songs miss thing. Can’t wait for this to drop!”, Nicki wrote.

Obviously, Tasha took her up on it and BOOM, here we are with unarguably the biggest global debate this year in entertainment.

I tried dodging from this one but here I am with this #EnoughSaid piece on it. Why did I do so? Because I believe there is every need for us to have clarity about things like this.

For the fact that many people have said that only God has the final say in this issue, permit me to bring your notice to what God has put down with regards to the things we see today that confounds us like this.

Truth is, if Christians would only search scriptures and allow the Holy Spirit give them deep revelations of things like this, we would be more of spectators than agitators over what has been settled in God’s word already.

After being a spectator for days on end over this and desisting from speaking on it, this verse finally came to me; “So when you see standing in the holy place ‘the abomination that causes desolation,’ spoken of through the prophet Daniel—let the reader understand—then let those who are in Judea flee to the mountains.” – Matthew 24:15-16.

Dear friend, do you know that these very words were spoken by Jesus? The next few paragraphs from LHT throws light into this:

Jesus Christ referred to the “abomination of desolation” in Matthew 24:15, mentioning it as a sign of the end time just before His return to the earth. Jesus’ reference was to a prophecy originally given to Daniel (Daniel 12:11).

“The Hebrew root for abomination is shaqats, which means ‘to be filthy,’ ‘to loath,’ ‘to abhor’” (“Abomination of Desolation,” International Standard Bible Encyclopedia). It is most often used to describe idolatrous worship practices, especially those most offensive to a sense of decency and morality. The New Testament equivalent means “detestable.” Albert Barnes adds that the phrase the abomination of desolation “is a Hebrew expression, meaning an abominable or hateful destroyer” (notes on Matthew 24:15). Biblical prophecy often includes more than one fulfillment of a particular statement, and this is certainly the case with Daniel’s prophecy. By looking at previous fulfillments, we can learn more about what to expect…

Dear friend, did you see the part that said that the abomination of desolation is something that is most offensive to a sense of decency and morality? Does this ring any bell around the image Nicki has portrayed so far and the argument people have about her not being the best choice for Tasha’s collabo?

Did you see that Jesus clearly said that the abominable would stand in the Holy Place and that this is a clear sign of His second coming? The interpretation of Daniel 9-11 is difficult and disputed, but it does have some fixed points, and the nature of the abomination that causes desolation is one of them.

Daniel 9:26-27 refers to a prince who will destroy the city (Jerusalem) along with its temple and sacrifices, “and on the wings of abominations shall come one who makes desolate.” Two chapters later there is another reference to an “abomination” in connection to the temple: “forces from him shall appear and profane the temple and fortress, and shall take away the regular burnt offering. And they shall set up the abomination that makes desolate” (11:31).

What this means is that before the one (the prince) who makes desolate comes, forces from him shall appear and profane the ‘temples’…

Are our bodies not God’s Temple? Ofcourse they are. Is our sister Tasha Cobbs God’s Temple? Yes she is. Do we feel she has stood with an abominable?

Before you go crucifying her, please do know that what Judas Iscariot did by betraying Christ was abominable but without his betraying Jesus, Jesus wouldn’t have been crucified and then we would not get to have salvation. Even Jesus told him to do what he had to do quickly. Why? So that scriptures would be fulfilled!

So, Tasha Cobbs featured Nicki and there is likelihood that other gospel artistes might do so too. Tell them to do it quickly, if they are the ones scripture says will be desecrated before the coming of the Lord, then let them do it for it will indeed be in fulfillment of the prophecy already written.

Indeed, we are in the last days. Everything God said would happen before the return of Christ. Dear Christian, why do we then fret and try to argue our soul out over issues like this? instead of fighting over these things, look at them from the place of God’s prophecy being fulfilled.

No matter how much the other disciples must have prayed to change Judas Iscariot’s deed of betraying Jesus, God wouldn’t have changed that. Judas was meant to do that so that prophesy would be fulfilled. God has the beginning and the end. Understand things from His superior point of view and rest your arguments.

One thing I implore all who believe in God to do is to try not to argue things from the present alone. It is best if we see things as God does. A lot of what we see today have been written in scriptures. When they occur, instead of arguing and cussing ourselves out, let’s allow the Holy Spirit show us where they stand in God’s word.

In Mathew 24:24, we are told that ‘For false christs and false prophets will arise and perform great signs and wonders, so as to lead astray, even the elect’. Are we aware that this is already happening amongst us? If we faint over these, how will we now cope when we see God’s elect deceived and when we see the desolation sit where it ought not to sit?

Let’s at all times see life through God’s revelation. Let’s lean not on our own understanding. Allow the wisdom of God to guide you in these things. His wisdom makes you see things as they truly are, devoid of error.

In all, KNOW YOUR GOD. Know God! When you do, no matter what you see happen, you will find peace in His wisdom and calm even in the face of the storms He said would come. Don’t hope on a gospel artiste, pastor or your friend and fall into desolation when you see them fall or do certain things that may or may not be in line with God’s will.

Many will fall and many other things will happen, all to fulfill scripture. As for you, stand…stand on God’s word and know your God. We really need to stop trying to put God in a box. What we see has already been written. Yes many will be reached with the gospel and this will be done even in the strangest of ways but one thing is sure, the gospel will spread through to all, even from the mouth of those whom we least expect and whether or not their intent was for God or not.

If you are on the side of God Almighty, do realize that His is the supreme side. Even the abominable will all give way to His Truth. No need to fret, mehn. All you see today have already been written. Know thee the one who made it written without trying to make Him fit into the box of your own opinion or limited understanding.