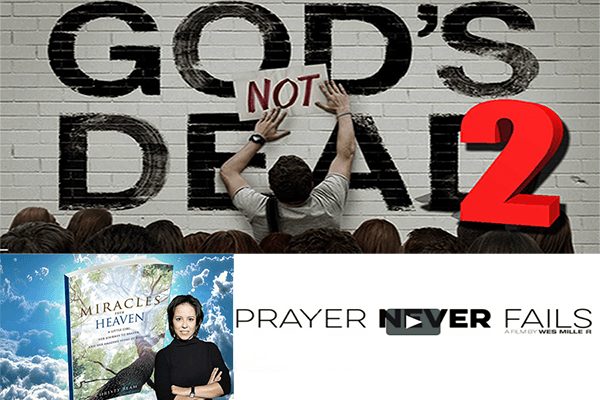 In the past few years christian movie enthusiasts have had a lot to cheer about with some decent quality christian movies ranging from God’s not dead , Unconditional , Heaven is for real, faith of our fathers etc.

2016 also promises to be a very good year for christian cinema and Worshippersgh is going to look at 4 highly anticipated Christian movies to look out for in 2016.

1. God’s not dead 2
The first part had a budget of around 2 million dollars and ended up making over 60 million dollars showing you how much of a hit it was with the Christian community.
Producers Pure Flix Entertainment are back with a sequel which is highly anticipated with a bigger budget , better actors ( it stars Jesse Metcalfe, Robin Givens, Melissa Joan Hart)and
It certainly looks likes it’s going to be a hit. The sequel follows the story of a christian female teacher defending the existence of God in a law court after school authorities tried to sack her for mentioning Jesus while lecturing.

2.Miracles From Heaven
Director by Patricia Riggen and written by Randy Brown miracles from heaven tells a touching story 12 year old Anna daughter of Christy Beam who suffers from a severe disorder and can only feed through the usage of tubes but after having a near death experience she is miraculously healed.

Bases on the book Miracles from heaven by Christy Brown this touching story of how the Lord is still in the miracle bussiness is definitely going to be a hit among Christians
It stars Jennifer Garner, Kylie Rogers, Martin Henderson ,John Carroll Lynch and Eugenio Derbez.

3. Prayer never fails
Prayer never fails has some similarities with God’s not dead 2 and is about a high school basketball coach who is fired for praying with one of his players and follows God’s calling and hires an agnostic, gambling lawyer to file a lawsuit.
Directed and written by Wes Miller and starring Eric Roberts, Cathy Lee Crosby and Lorenzo Lamas , many Christians would be hoping this low budget movie has as big an impact as God’s not dead.

PRAYER NEVER FAILS is a gripping legal drama about an up-and-coming high school basketball coach on his way to a record number of wins when he is fired after he risks everything for a player suffering at home. From Writer/Director Wes Miller, and starring Nick Lashaway (IN TIME) and Minister and Actor Clifton Davis (ANY GIVEN SUNDAY), this story follows the journey of a coach destined to claim his God given calling. Wes Miller chronicles how from termination to redemption, the single act of prayer leads to the realization that one man will do anything for the students that mean so much to him and that same act will redeem another man who has lost his way.

Directed by Kevin Reynolds and produced by Mickey Lidell, Patrick Aiello and Pete Shilaimon , Risen which has an epic feel to it centres around Clavius a powerful Roman Centurion who is charged by Pilate to investigate rumors about Christ resurrection and also locate the body of Christ which they believe was stolen by the disciples.
The movie follows the man hunt for Christ’s body by Clavius.
This post resurrection epic stars
Joseph Fiennes, Tom Felton , Peter Firth, Cliff Curtis.