Gospel artiste Diana Hopeson  paid a courtesy call on the Graphic Communications Group Limited yesterday to show her appreciation to the company for its support to her ministry over the years.

Jan 4, 2022
Prev Next 1 of 285
She was accompanied by gospel artistes Mary Ghansah and Bernice Ofei and members of  the management team.
Mrs Hopeson presented a cake and a citation to the Graphic team as a sign of her  appreciation to the company for being there for her right from the beginning of her career till date.

In a short address, Mrs Hopeson, whose first album was released 25 years ago, recalled how Graphic brands specifically the  The Mirror and the Graphic Showbiz have been instrumental in ensuring  she got the needed publicity over the years.

From left -Mrs Hopeson , Ms Mary Ghansah  and Ms Bernice Ofei  during the meeting with editors of the Graphic Communications Group Limited.

On his part, Mr Ransford Tetteh, the Editor of the Daily Graphic, who stood in for the Managing Director, congratulated Mrs Hopeson on her 25th anniversary and equally  expressed his appreciation to her for recognising the role the company had played in her career.

He assured her of the company’s continuous support, especially as she rolls out activities to mark her anniversary.

Ms Adwoa Serwaa Bonsu, theEditor of Graphic Showbiz thanked Mrs Hopeson for her gesture and added that covering her over the years was in line with the company’s responsibilities,but it was humbling she recognised that by coming over to thank the company. 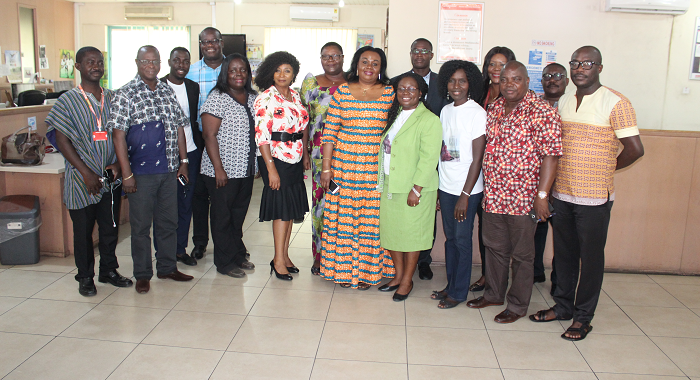