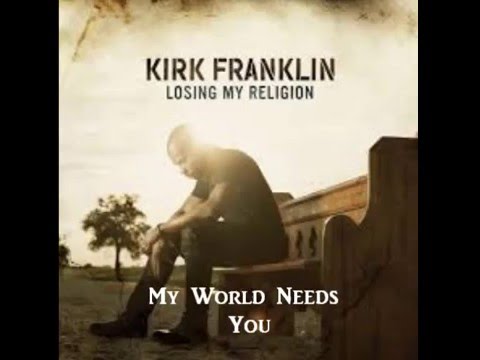 There is no doubt that everyone will be yearning to jump onto the groove of any new song from the 10-times Grammy Awards winning Artist – Kirk Franklin because of the lyrical richness of his compositions.

This time he decided to feature Sarah Revee, Tasha Cobbs and Tamela Mann on his new single, ‘My world needs you’. The cool soul and heartfelt song speaks about the social injustices happening around the world today and calling upon God to bring strength in time of hardships.

Written by Franklin, his message on “My World Needs You” supports his continued endeavors in addressing and reflecting on issues that anyone faces, and uniting together to help each other. He continues to give back with charitable organizations close by and abroad addressing these issues. This week, Franklin will be in Haiti, headlining Giving Hearts with Love’s “Rise Up for Haiti” benefit concert on Thursday, January 12th, 2017. He has also worked with The Expectations Project, a non-profit organization that sheds light on education inequality.

Kirk is currently enjoying the massive thriving of his eleventh studio album, ‘Loosing my Religion’ on major gospel, HipHop&R&B charts, including billboard. The albums which includes singles such as “123 Victory” and “Wanna Be Happy?” have also seen massive airplay on major radio and tv networks across the globe, making him a great force to reckon with in the gospel music industry

“My world Needs You” which was released today, has so far seen massive recognition so far. Listen to the song below.