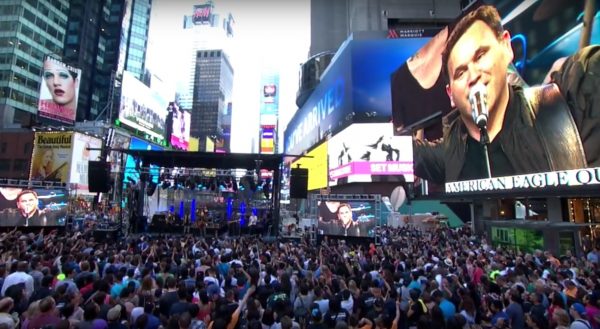 Matt Redman’s powerful rendition of GRAMMY® winning single “10,000 Reasons (Bless The Lord)” live in Times Square at 2015 NY CityFest, has received a rapid rise in viewers, raising its initial viewer count tenfold. Garnering half a million views in the last 72 hours on YouTube alone, over 50,000 people have shared the now trending video on Facebook.

Church Leaders, Independent Journal Review, World Religion News, Charisma News, Christian Post, Faith It and more have organically shared the story, sighting Redman’s performance as “moving” and “beautiful glimpse into what it looks like when we worship God in the midst of a secular culture.” An overwhelming response from viewers say a resounding “just what this country needs,” less than a week before the 2016 presidential election, supporting the timely popularity of the video.

“I’m so glad to see this ‘10,000 Reasons (Bless The Lord)’ song video gathering some momentum in the space of a few short days,” shares Redman. “From some of the comments on social media, it seems many are resonating with the video because of the political and spiritual climate in this nation right now. I guess it’s encouraging to see the name of God being lifted high in the middle of one of the USA’s most iconic locations, at such a time as this.”

Redman recently released his first-ever holiday record These Christmas Lights. Written in London, Los Angeles, Nashville and Israel, the album presents 11 new songs reminding listeners that “the glory of Christmas is the glory of Christ.” With guest appearances from Natasha Bedingfield, Chris Tomlin and Tasha Cobbs, many of the song were co-written with Jonas Myrin, Redman’s co-writer of the “10,000 Reasons (Bless The Lord)” anthem. These Christmas Lights is available now.

A key songwriter for today’s church and an active worship leader for the Passion conferences around the world, Matt Redman’s songs have been recorded by Chris Tomlin, Michael W. Smith, Israel Houghton, Jeremy Camp, Jesus Culture, Passion, and many more. Winning two GRAMMY® awards in 2015 from the powerful hit “10,000 Reasons (Bless the Lord),” the single later was certified RIAA gold, named ASCAP’s Christian Music Song of the Year and Billboard’s Top Christian Song. Additionally, Redman has 26 songs in the CCLI Top 500, with six populating the Top 50. Hit his album Your Grace Finds Me (2013) debuted at No. 1 on the Soundscan Christian Albums chart and in the Top 30 on the Billboard 200. Unbroken Praise (2015), recorded live at the iconic Abbey Road Studios, hit the Top 20 on the Billboard Top Album Sales chart and No. 1 on iTunes and Billboard’s Top Christian Albums charts. His first ever holiday record, These Christmas Lights, is available now.