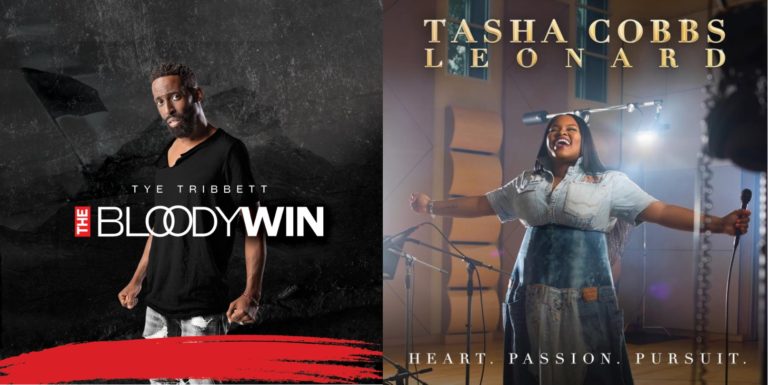 The premier Gospel record label in America, Motown Label is enjoying the number one and two spot respectively for their two recent albums – ‘Bloody Win’ by Tye Tribbett and Heart.Passion.Pursuit by Tasha Cobbs Leonard.

Having worked previously with Tasha Cobbs Leonard on her incredible, barrier breaking Heart.Passion.Pursuit album which obviously have enjoyed the number one spot for couple of weeks, the American gospel power-house and record label is now enjoying the number one spot again with their newest album ‘Bloody Win’ by Tye Tribbett. ‘Bloody Win’ has displaced Tasha’s album from the number one spot, moving it to the second spot on the Billboard’s Top Gospel album since last week.

“The immediate success of Tye’s new album, and the way that Tasha’s new project continues to resonate with audiences, really underscore the importance of artist development and partnership—two core values for our label,” says EJ Gaines, VP of Marketing, Motown Gospel. Monica Coates, VP of A&R continues, “We work hard to develop artists and to partner with them to release relevant music that impacts the world. It is extremely gratifying to see this level of engagement from their fans.”

Motown Label has also seen incredible wins on the night of the DOVE Awards 2017. Tasha Cobbs who co-hosted the show with the sensational Kari Jobe took the opportunity to perform her beautiful worship single on the album ‘Gracefully Broken’ with Mart Redman.

Besides, the producer of Tasha’s earlier ‘Grace’ album, Vashawn Mitchell has also picked up couple of awards, firstly for his single ‘Joy’ from his  ‘Secret Place (Live in South Africa)’ album and secondly for producing ‘Grace’ album. So on the night it was a whole win for Motown Record Label.