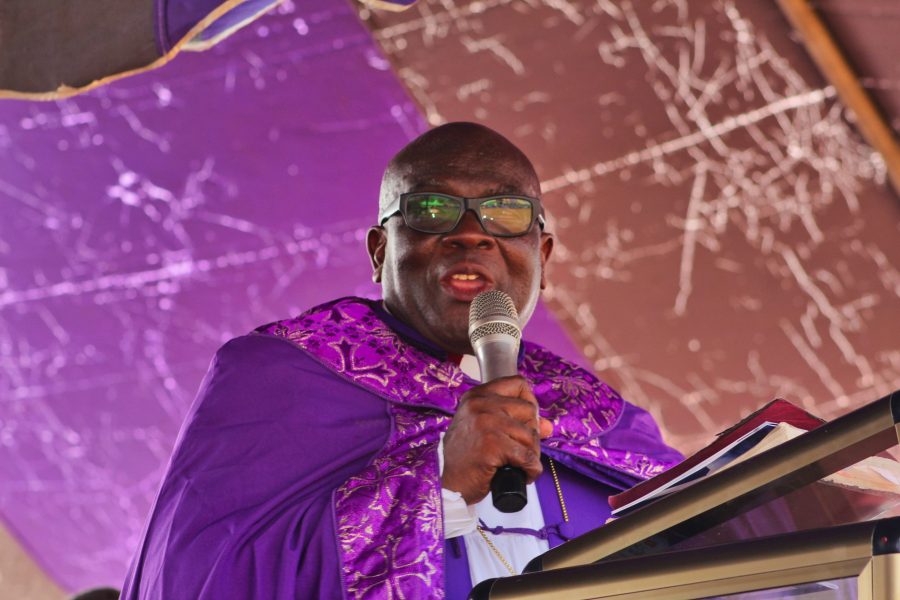 The New Covenant Apostolic Church International, one of the vibrant Pentecostal ministries from Ghana but reaching around the world, has inaugurated their newly elected Chairman Apostle David Cofie into the office at their annual Feast of Tabernacle Convocation held in Kpong.

The spiritual inauguration ceremony which took place on December 25th, a memorable Christmas day is a sign in the right direction for the ministry that has existed for 66 years, having elected spirit-filled chairpersons for three consecutive times since the passing on to glory of founder Chris Diaba in 2000.

Aps. Cofie was declared the winner of the election which came off in Tema by the General Council as a final process stipulated in the church’s constitution to approve an appointed candidate for the chairmanship position of the church.

Speaking to the congregants about his journey and experience, Apostle Martin Agbemabiesse says the Lord has shown His glory mightily in every step of the way and will undoubtedly continue to lead the church to a higher height.

“I do not have words to describe the great works that the Lord has done for us. Exactly a year ago when we were celebrating the Feast of Tabernacles (2018), we were strengthened by the theme “Christ in you the hope of glory”. Undeniably, Christ has shown His great glory in us as a church within the year. Among the great and momentous achievements that Christ led us to chalk is the successful organization of a conclave to select the next Chairman and the celestial election of our Chairman seamlessly without any acrimony. These and many other things the Lord had done for us within the year. We agree with the psalmist that “the Lord has done great things for us and we are glad” (Ps. 126:3)”

He, however, encouraged members to accord the new Chairman all the respect, honor, and co-operation that is worth building the church and hold on to their faith in God.

“As we prepared to enter the New Year, many of us, are full of apprehension concerning
the situations and circumstances that we would grapple with. But let us remember
that our Lord Jesus Christ is the only answer to our problems and also, the answer to the
problems of the world. He is the author and finisher of our faith, let us rather focus our
attention on Him and build a solid relationship with Him.”

Addressing the congregants the New Chairman assured the church of his commitment and great desire champion the manifestation of God.

Reverend David Cofie is an accomplished Educator and an Administrator, Pastor, Counselor, and a Theologian. He holds an Executive Diploma in Pastoral Ministries from The New Covenant Institute of Bible and Advanced Leadership Training (NIBALT), obtained in 2019. He taught for a number of years in both Basic and Secondary schools after obtaining a 3-year post-secondary Teacher’s Certificate from Accra Training College, now Accra College of Education in 1982.

Rev. David Cofie was ordained a pastor in The New Covenant Apostolic Church Int. in February 1991, after graduating from NIBALT with a Diploma in Pastoral Ministries in November 1989. He was called to the office of an Apostle in December 2014. He was appointed an Executive Member of the church in 2005, and later as the Deputy General Secretary. He was elected as the Greater Accra Regional Youth President and later became the National Youth President. Subsequently, he was appointed as the National Youth Pastor. He was once the District Pastor for Greater Accra.

Rev. David Cofie is currently in charge of the Church Protocol and Inter-Church relationship. He is also the Apostle in charge if Tema / Ashiaman and Anlo / Akatsi areas and the Pastor in charge of Madina assembly. Rev. David Cofie has been the Chairman of various convention planning committees, he is also a member of the finance, disciplinary, constitution review and minister’s vetting committees. He was also instrumental in the formation of the media, health, security, power and technical teams.

Rev. David Cofie is currently in charge of the Church Protocol and Inter-Church relationship. He is also the Apostle in charge if Tema / Ashiaman and Anlo / Akatsi areas and the Pastor in charge of Madina assembly. Rev. David Cofie has been the Chairman of various convention planning committees, he is also a member of the finance, disciplinary, constitution review and minister’s vetting committees. He was also instrumental in the formation of the media, health, security, power and technical
teams.

He was also instrumental in establishing some new assemblies in Accra, Dome Pillar 2, Ashongman Estates, Peace Land in Ashaiman and Rev. David Cofie is married to Mrs. Joyce Afua Cofie, a beautiful woman of God who a dressmaker and an Event Planner. They are blessed with a beautiful Eleagbe Makafui Abla Cofie.

“Pray for the sitting…