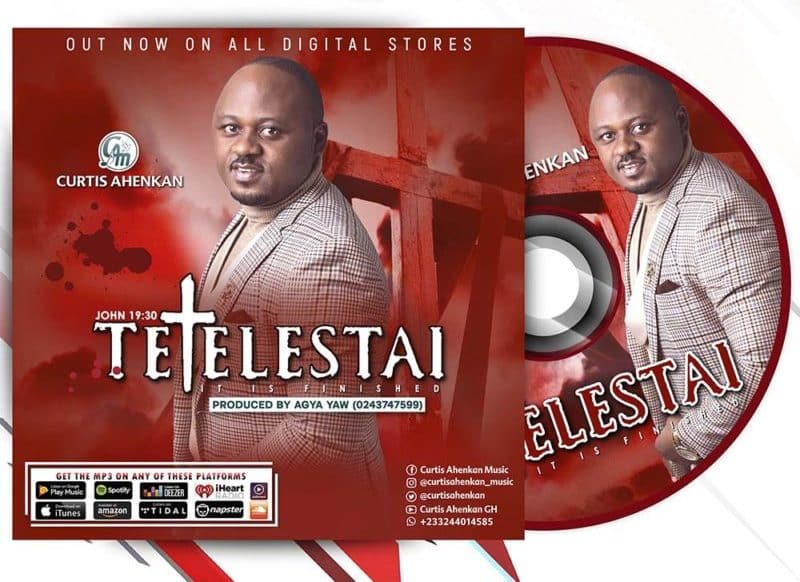 Minister Curtis Ahenkan on this special season as we celebrate the sacrifice of our Lord Jesus Christ, reminds all Christians of the essence of Christ’s death and the power thereof in his new song ‘Tetelestai’

The song which means ‘It is finished‘ is a soft contemporary worship song offering worship to Jesus and was beautifully delivered by Curtis and his team, a multilingual song done in English and Twi.

“Tetelestai” is a song for Christians of all ages. It talks about the finished work of Christ on the cross which bought us our salvation. It is not just a beautiful composition to admire or a nice song to enjoy but more so, a declaration of faith to make and assimilate.”

“I say, ‘the package of words and works of Jesus is a whole law which can be activated and benefited from through faith.’ So, as you sing along, believe that when Jesus says in JOHN 19:30 that IT IS FINISHED, it means He has already and eternally completed the work concerning your salvation, wellbeing, healing, prosperity, peace, etc. Declare it and it shall so be. Tetelestai! It is finished.”

Curtis Ahenkan is an ordained elder of The Church of Pentecost; he worships with the English Assembly of Abrepo District, under Suame Area in Kumasi. He is a teacher by profession stationed at Christ the King Catholic SHS, Obuasi.

He is a gifted songwriter and vocalist who began writing songs in 1998 during his Secondary School years. He has been a blessing to the body of Christ in a couple of denominations aside from his parent denomination, ministering in songs and poetry in and around Kumasi, for years now. He has been a music director from college to the university and in a couple of denominations too. His first major attempt at mainstream music was in 2003 when he recorded his first studio album which never got released due to lack of financial support.

He carried on ministering till he released his first single in 2012; a video entitled ‘M’agyenkwa Pa’. He has since released 4 more singles, entitled Akoma Koro (With One Heart), Sovereign Over All, Aseda Nka Oguama (Thanks Be To The Lamb) and Extravagant Praise Medley.

Thank you, Jesus, for Your sacrificial work

on the Cross that bought me. Hallelujah!

[I was once a hopeless sinner]

Yesu Kristo bɛwuu dua no so maa me

[Jesus Christ came to die on the cross for me]

[Despite the pain of torture]

[He stood firm in my stead]

[And today, I am liberated]

[He screamed on the cross]

[He screamed with a loud voice saying:]

[The work of your salvation is complete] – x4

REPEAT IN UNISON BUT HARMONIZE THE LAST LINE

For your sake, I left my holy realm of glory

And came down to the realms of earth

I took upon myself your shame and pain and guilt, and

I bore them on the cross

And there I worked to ransom you

and claimed you back to be my own

The debt you owed, I’ve paid it all

[The work of your salvation is complete] – x4

REPEAT THE CALL AND RESPONSE

(Announce it on the horn)

It is over! Change has come now!

For the price is paid off!

And the guilt is over!

And now, this is the word of our testimony:

Jesus came to die on the Cross of Calvary

He took our place and carried our burden

And on that cross paid the debt we owed

Now HE says and we believe:

Tetelestai! It is finished!! Hallelujah!!!