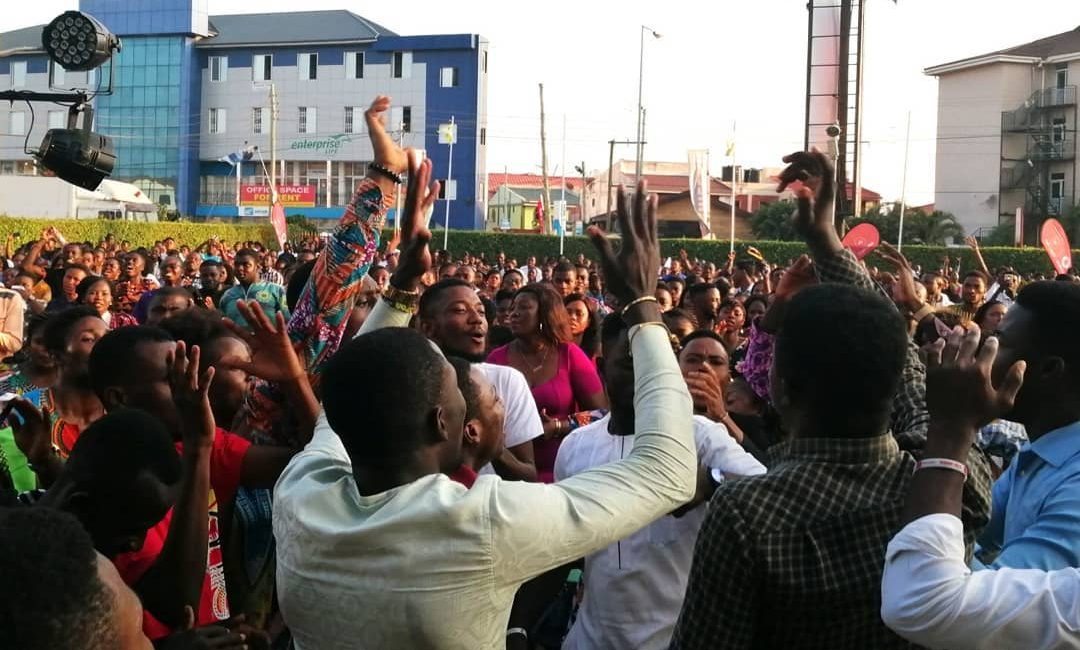 Some outside patrons of Tehillah Experience complained about space but were not left out.

The highly patronized Tehillah Experience organized annually by the Ohemaa Mercy Ministry came off last Sunday, and as it has been the norm over the years, the event experience incredibly huge attendance.

Well, some patrons who spoke with WorshippersGh have expressed their displeasure of maintaining the same event ground (ICGC Calvary Temple, Sukumono) for a number of years now in a row.

For what some might not know, people had already made their way to the event ground at 11 am (5 hours to the program). The main auditorium by 2:30 pm was already full up with only the seats for ministers and invited guest available. And obviously, this cannot be given out to the regular attendant but to make themselves comfortable on a well-arranged seat outside the auditorium.

David King, whom we met at the entrance was a little agitated about the situation and expressed that, the show was supposed to be started at 4 pm, he had been there 2 hours earlier but could not get the opportunity to enter the main auditorium just to at least stand up to watch the proceedings. Many a time, there were struggles between patrons and the policemen at the entrance and at a point, these ‘wild’ crowd took the opportunity to forcefully enter right after ushering a minister in.

Other patrons we interacted with who knew there would be thousands of people gathered had come an hour or 2 hours ahead of the concert. They also expressed the organizers could have acquired a bit spacious auditorium to cater for the growing number each and every year. Some of these attendees did not waste time at all to join the huge crowd seated at the main entrance watching LED screens.

These patrons outside I must say were very proactive worshippers. These strong and ready to fellowship ladies and gentlemen never waited for the person on stage to lead them to shout or dance. At a point there was an electric problem in the main auditorium, hence the sound and the lightening was totally off. This is what they choose to do;

All the artistes who performed on the night had the opportunity to spend at least 3 minutes with them outside the main auditorium on a stage separately mounted outside. These ministers were accompanied as and when needed by an entourage of cameramen, media and protocol following appropriately.

To this end, I would say these patrons were right for the event space was not spacious, but the several ministers tried as much as possible not to leave them out watching the screen throughout the night.

Prophet Sampson Amoateng to host his…