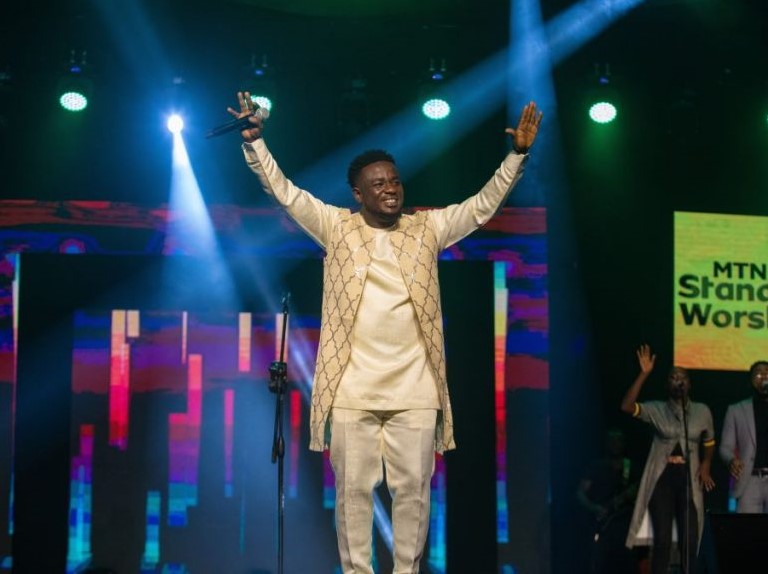 Rising gospel singer and Hewale Lala hitmaker Perez Musik stunned the crowd at Accra’s MTN Stands In Worship concert on October 22, 2022, while marking his debut appearance at one of the country’s biggest Gospel music events.

The prolific worship leader raced through a 15-minute totally inviting and electrifying worship-filled 9-song set that featured performances of some of his biggest songs, such as (Song of Strength) and Blema Tesaa (Rock of Ages), from across his discography, backed by a full band. He also performed covers of some of the country’s most acclaimed gospel music that beckoned the Spirit to fall from the gates of heaven into the night.

Filled with the power of the Holy Spirit, he provided the audience with a supernatural encounter with God and a sweet fellowship of the Holy Spirit; offering them with an opportunity to express their gratitude to God for His protection throughout the year.

Perez Musik shares his testimony about how God rescued him from a near-fatal depression, how he gave his life to Christ after being saved, and how he was drawn to God’s things, particularly church music, after that.

Born Frank Tagoe, a gospel artist and songwriter, is gradually establishing himself as a must-hear gospel artist of our time. He is currently credited with the two most popular gospel songs in Ghana, now dubbed Hewale Lala (Song of Strength) and Blema Tesaa (Rock of Ages), which were released in 2019 but broke into the charts in 2022 and have since received heavy rotation on radio stations across Africa.

Perez published his debut album, Tenacity, in 2015. The 13-track project earned him a nomination at the Vodafone Ghana Music Awards 2016.

Organized by telecommunication giants, MTN, the annual Christian concert seeks to offer Ghanaians the opportunity to appreciate God’s mercies, grace, and guidance throughout the year. The event has grown to become one of the most hyped on MTN’s calendar, with past performers including Donnie McClurkin, William McDowell, Sinach, Micah Stampley, Nathaniel Bassey, Patrick Duncan, Joe Mettle, and Elder Mireku.

This year’s edition, themed “Arise and Worship,” was held at the Fantasy Dome, Trade Fair La. The night brought together Christians and gospel music fans on one stage to worship and praise God. The night was headlined by Diana Hamilton, Piesie Esther, Koda, and more other guests.