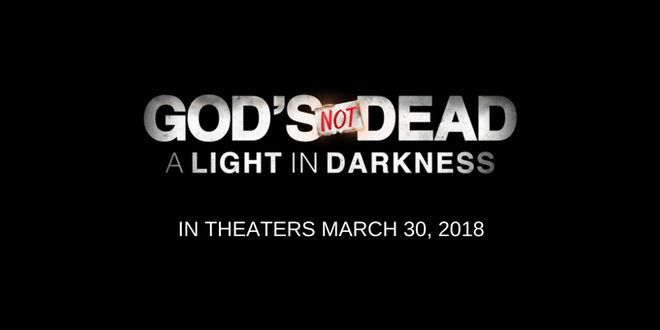 Pure Flix announce the release of God is not dead 3

Following the success of “God’s Not Dead”, which was 2014’s highest grossing independent film and “God’s Not Dead 2” , Christian film studio Pure Flix returns with the third installment of the Gods not dead franchise.

According to the producers, “God’s Not Dead: A Light in Darkness” follows Reverend Dave as he is released from prison to a flurry of controversy. The growing social unrest leads to Dave’s church being burned down, a fire with tragic results.

Devastated, Dave is launched on a painful spiritual journey as he fights against the university trying to keep him from rebuilding his church, as his belief that “God is good all the time” is put to the test. Along the way, Dave enlists the help of his estranged atheist brother who will support Dave in his legal fight, but also challenges him to recognize that sometimes fighting doesn’t require defeating those we disagree with, but rather finding a way to heal, and to rebuild.

“Audiences have continued to show support and interest in the GOD’S NOT DEAD films and their relatable characters who endure similar challenges in their personal faith and lives,” says Michael Scott, Pure Flix founding partner. “Our hope is that these films offer entertainment and encouragement, with a starting point for sharing faith in a respectable and compassionate manner.”

Below is the trailer of the movie.

From the producers of ‘War…