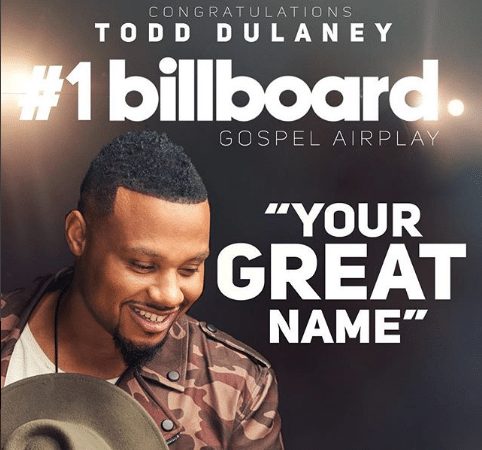 For 3 weeks in a row, ‘Your Great Name’ by Todd Dulaney has occupied the number one spot for Billboards gospel airplay, a milestone he anticipated since its release last year.

The song released earlier ahead of the main ‘Your Great Name’ album as a single, have had impactful testimonies and massive download and airplay on major platforms across the globe.

“Your Great Name” is a declaration of pursuit and passion that speaks to the reverence, love and power that comes from the name of Jesus. Todd Dulaney delivers this song live with the perfect balance of beauty and boldness. This ONE name provokes the listener to have great hope, determined faith, and unending love that dismantles the pain, fears and defeats of any day.

Your Great Name was closely followed by ‘He Promised’ by BeBe Winans Featuring Tobbi & Tommi & Kiandra as the second most played song on the Billboard chart.

Todd Dulaney is out with much…