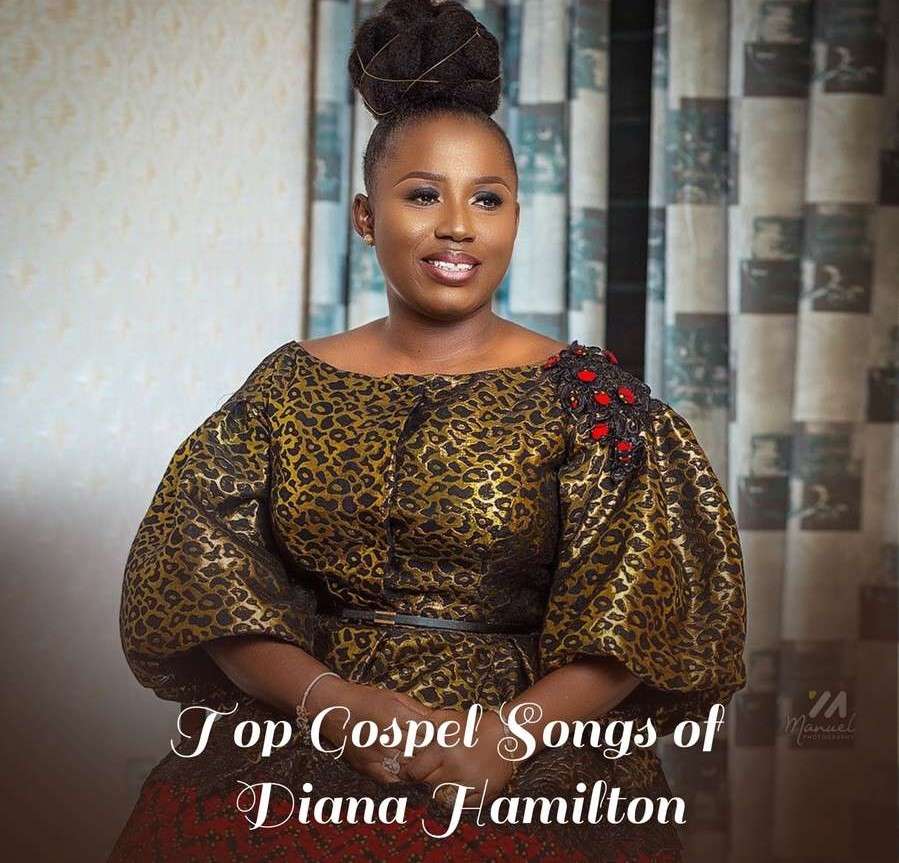 The UK based Ghanaian Gospel singer and award-winning gospel artiste Diana Hamilton has become a household name as far as gospel music is concerned. With the release of several hits songs to her credit, Diana remains one of the top gospel music exports from Ghana.

In this article, we will take a closer look at Diana Hamilton’s music ministry and bring to your doorstep the editorially chosen top gospel songs released by the two times VGMA Gospel Artiste of The Year. These are songs clearly loved and appreciated by the masses which has increased the demand for her ministry both in Ghana and outside the country to go up high.

She has 5 albums to her credit which include ‘Osoro be kasa’, ‘Ensi wo yie’, ‘Blessings’, ‘Jehovah’, and ‘I Believe’. Lets look at some of the top songs of Diana Hamilton.

Awurade Ye is the second release of the year 2021 Multi-Octave award-winning and the Vodafone Ghana Music winning artist after “Victory Praise” an impressive compilation of the local public songs. Diana is well known for blending the local highlife gospel with the contemporary perfectly hence appealing to both the young and old.

‘Mo Ne Yo’ is a Twi congratulatory phrase that connotes ‘Well done. ‘Mo Ne Yo’ is a song of appreciation to the Lord, thanking Him for how well he has dealt with us.”The song according to her also reminds us to count our blessings and it echoes Psalm 103:2 ‘Bless the Lord o my Soul and forget not His benefits.

The old, public domain song which is translated as ‘Miracle Working God’ has once again been revived by the award-winning UK based Ghanaian artiste during the last edition of the ‘The Experience’ concert held in Kumasi. Many fans, as usual, cannot get enough of this song already.

‘Wasem (Your Word)‘ came after hit songs like ‘Mo ne Yo‘ and ‘Nsemkyerene Nyankopon’. The song which empowers the believer about the essence of the Word of God and its ability to bring to pass anything we desire comes with great Afrobeat instrumentation, a typically classic style she employs with a touch of praise groove.

This is a live version of her beautiful performance during her 2017 edition of ‘Experience with Diana Hamilton’ worship concert. The song dwells on the fact that there is a destination we are all going and it is imperative for us to realize that we just work in progress moving towards our destination of riches, perfection, strength, etc.

Diana Hamilton released the live video of Yehowah Behwe in January 2018. This was performed at  ‘The Diana Hamilton Experience Accra, 2017. Yehowa Behwe is in the Twi dialect from Ghana and gives the assurance that the Lord will take care of you in all your endeavors and that His plans for you are good so say Amen to the pronouncements in the song.

From the Blessing album, Diana released this song “Eye Woa” 9 years ago as a single that resonated with a lot of people. The prophetic, faith-based song delivers hope to all manner of people who are ready for the miracles.

‘I Believe’ is the title track of her very last album. The sweet highlife song puts faith and hope in the Lord based on His Word to do exceedingly, abundantly above all that we can think. Though not so popular compared to the above, I Believe played a very important role in the success of the album released two years ago.

This is another prophetic song released 11 years ago that happens to be one of the people’s favorite. ‘Ensi Wo Yie’ proclaims blessings into the life of the listener. Literally translated as “It is well with you” focuses on what God can do and in fact what he has already delivered into our hand which is yet to manifest.