Christmas is always an exciting moment for both the young and old and most especially for Christians across the world as we focus on the reason for the season – The Lord Jesus Christ.

Characterize by sweet melodies about the birth of Christ, Christmas songs or Carols brings the tangibility of the season alive.

In this article, I present to you some of the finest Christmas albums released by renowned gospel singers around the world. Most of which are renditions of the older but ever-refreshing Christmas Carols ever known in history while some are entirely new compositions focusing on Jesus and his virgin birth.

Australian-born, Nashville-based sibling duo for KING & COUNTRY are no strangers to holiday music—they have released a handful of Christmas singles (and an EP, 2013’s Into the Silent Night) over the years, including a particularly popular take on the holiday classic “Little Drummer Boy.” This collection of songs explore the spiritual side of the holiday, like “Go Tell It on the Mountain” (featuring Gabby Barrett) and “O Come, O Come Emmanuel” (featuring NEEDTOBREATHE). They also include two original songs: “The Carol of Joseph (I Believe in You),” which considers the birth of Jesus from Joseph’s perspective, and the soaring, emotional “Heavenly Hosts.”

The ever amazing Maverick City Music came through with a  package of goodies for Christmas in their Maverick City Christmas project. The album consists mostly of very known Christmas Carols with a touch of deep worship, signaling all that it is a season of worship and bowing down to the savior whom we celebrate. Captured in the project are heart-moving medleys that are difficult to ignore. Notable gospel artists and regulars on Maverick features such as Chandler Moore and Naomi Raines as well as Jekalyn Carr.

The accomplished singer-songwriter, who topped the pop charts with the 2013 album “Burning Lights,” was inspired to write the title track to his new Christmas EP after finding out that — surprise! — he and his wife were expecting another child to arrive this Christmas season. The unplanned pregnancy was a shock at first, Tomlin says in a video on his YouTube page, but that soon gave way to the realization that the child was, he says, a “precious gift from God.” He pours all that joy into “Miracle of Love,” which is one of the best new Christmas songs we’ve heard in a long time. It’s one of seven cool tracks on this EP. (christomlin.com) 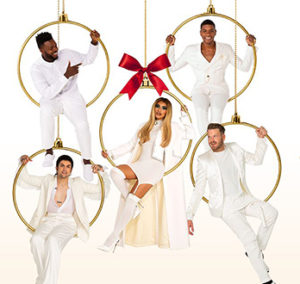 It’s hard to take the title of this album seriously. This is the sixth (!) Christmas album that the group has released during its still relatively young career. It’s pretty clear that our pals in Pentatonix don’t really think that we need just a little Christmas — they obviously believe we need a whole bunch of Christmas. And apparently, that view is shared because Pentatonix has sold 12-million-plus copies of its holiday records. The blockbuster a cappella troupe will likely do big business again with this offering, which is highlighted by the single “Amazing Grace (My Chains Are Gone).”

The 6-track Christmas EP features all original music and offers a range of holiday songs for any at-home celebration. Mitchell, well-known for bridging the gap between worship and praise, brings his signature flair to holiday music on HOME FOR CHRISTMAS. Mitchell gives us music for every holiday occasion while reminding us of the ultimate gift of Jesus and His hope and love given to us on Christmas.

The new project details and projects Christ as the center of the season as she expresses her vocal ability on her unique renditions of some of the well-known Christmas Carols plus some very beautiful original compositions. “The First Noel,” is an amazing 19-track collection featuring live renditions of some beloved Christmas classics including “Hark the Herald,” “O Holy Night” – alongside new songs penned by Ntokozo. The album also features Ntokozo’s Twi song ‘Yi Na ye’, a Ghanaian worship rendition translated us ‘Praise Him’.

I have found the light of Christ and…