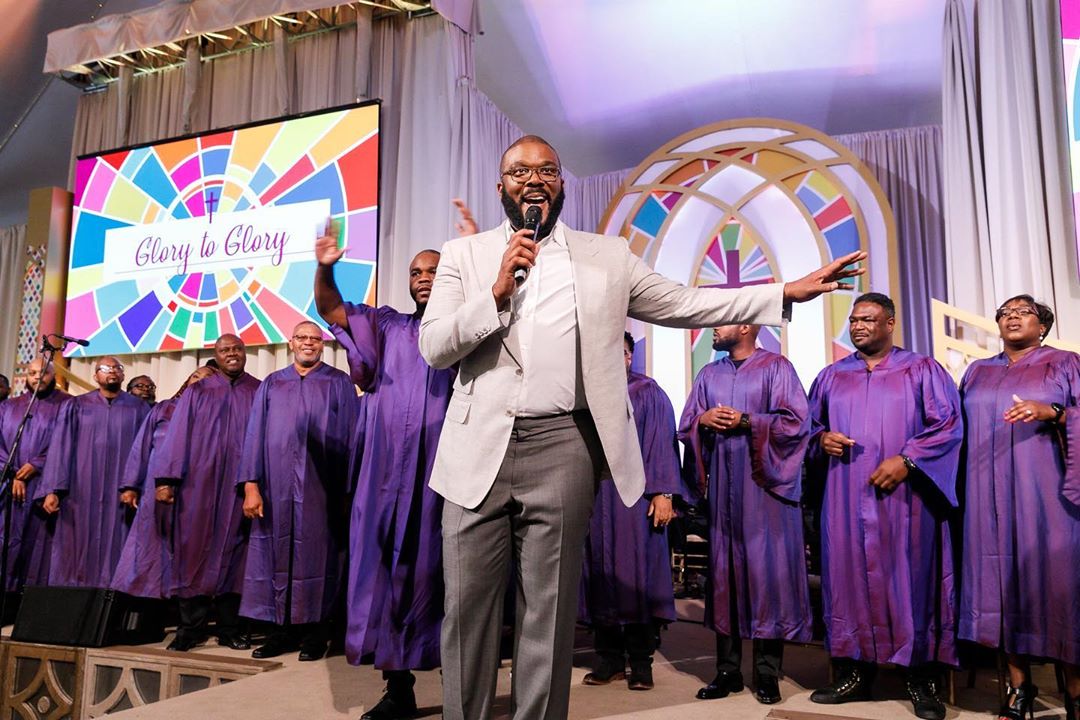 Tyler Perry hosted the grand opening gala for his new historic $250 million 330-acre states of the art studio in Atlanta over the weekend with Hollywood A-listers. To cap off the elaborate event, the filmmaker hosted a church service.

The gospel brunch and service was held in a replica church of the sanctuary that was featured in “The Color Purple” and featured performances from a gospel choir and the Clark Sisters, and a sermon delivered by Bishop T.D. Jakes.

“The View” host Sunny Hostin said Jakes honored Perry who “had a door opened for him and he turned it around and built a platform.”

The new Tyler Perry Studios was built on a former confederate army base, which is the first time in history that a black American has owned his own studio. On the property, Perry built 12 sound stages, each named after black actors and actresses that influenced the writer and visionary.

Check a  video of Oprah showed the mogul in tears as a Gospel choir sang while heading into the church.

The famous “Madea” creator took to Instagram after the grand opening to give God the praise for his success.

“Glory to Glory – Couldn’t close the weekend without Jesus meeting us on the lawn at the studio!! Having a full heart and a thankful soul to all that have prayed me all the way here,” Perry testified.

Among the other stars in attendance at the grand opening were Whoopi Goldberg, Halle Berry, Denzel Washington, Will and Jada Pinkett Smith, Samuel L. Jackson, Jay Z, Beyonce and Patti Labelle. There were also several people from the Gospel world in attendance, such as Bebe and Cece Winans, David and Tamela Mann, Pastor John Grey and Kirk Franklin.

“It was an extreme honor to be the homilist for the dedication of the new @TylerPerry studios! What was once a Confederate military base, was flooded with the sons and daughters of slaves and slave owners to dedicate the studio which is reportedly the size of three studios in Beverly Hills combined! To witness it was beyond any description I could articulate!” Jakes wrote on Instagram.

During an interview on the red carpet of the gala, Pastor Shirley Ceasar shared what she thought of Perry.

“God is using him not only in Atlanta, not only in the state of Georgia but in all of the United States and the World. His life is a legacy and it is showing these other young men that it is no secret what God can do,” she told Atlanta Journal-Constitution.

The Church must start paying attention…