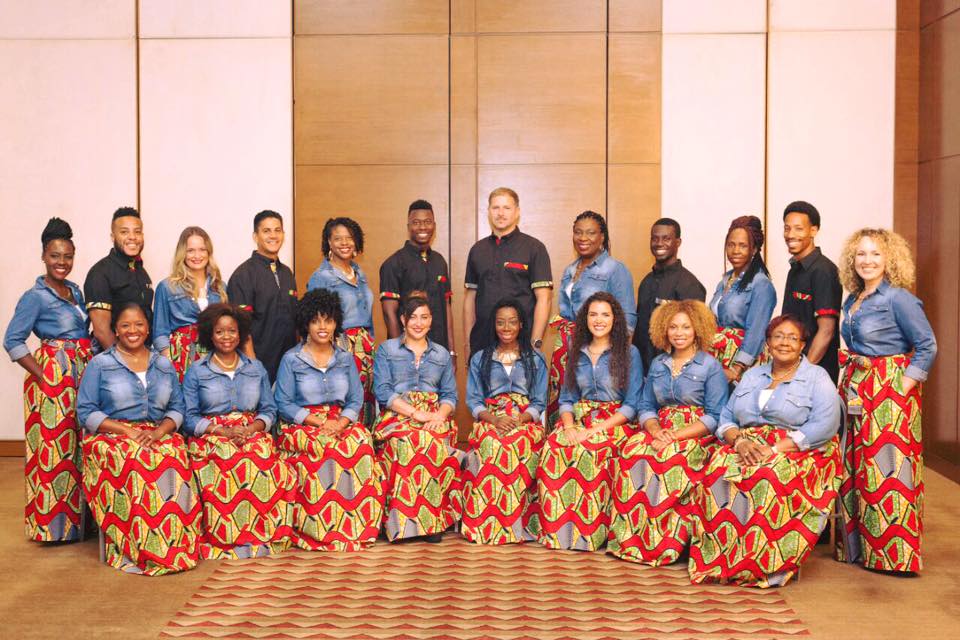 The day before the concert at the Perez Dome, the New York City-based performers met with employees of the event’s major sponsor, smartphone network Airtel Ghana, and sang some of the Brooklyn Tabernacle’s hit songs; after which staff took selfies with the singers before they headed to sound check.

Come Friday night, the enthusiastic group of singers, ranging in age from 20 to 60, were prayed up and ready to worship with the people of Accra who roared in praise as they watched the Brooklyn Tabernacle performers take the stage.

The Brooklyn Tabernacle singers, who were dressed in African inspired outfits, set the tone as they called on the presence of God before starting their performance. “It’s all about Jesus, and not about the Brooklyn Tabernacle,” one of the lead singers told the congregation.

Throughout the night they sang songs from both their new and older albums, such as “We Come Rejoicing,” which was a crowd favorite.

Some of the most electrifying performances of the night were the songs “He’s Alive,” “Said I Wasn’t Gonna Tell Nobody,” and the calypso number “It Is So.”

My Joy Online highlighted one of the Brooklyn Tabernacle’s singers, a Nigerian-born American, who told the audience “I am so glad to come home.”

She gave a very moving exhortation as she spoke of her mother who died just three months ago. She shared a powerful quote from her choir director, Carol Cymbala, who told her “now you get to live the Word of God.”

The singer touched the hearts of those in the audience as she explained that “The Bible is not just a story. It is an experience … every page every word every sentence is living.”

The Brooklyn Tabernacle singers were on stage for more than two hours and ended their set with everyone on their feet worshiping to the popular gospel song “Every Praise.”

In a description of the powerful night, a reporter with My Joy Online said, “Five hours had passed. We were back to Earth. But we won’t mind. We had been to Heaven. Everything will be alright.”

The Brooklyn Tabernacle, pastored by Brooklyn native Jim Cymbala, has always managed to stay under the radar in America despite its massive success and impact. The church recently released “The Rescue” a powerful film about the lives of five congregants who were radically changed by the power of God.

Also featured in “The Rescue” is the six-time Grammy Award-winning Brooklyn Tabernacle Choir, singing songs off their 29th album, Pray. Led by Carol Cymbala, the choir consists of more than 200 members and has recorded over 200 songs to date.

The film is now available to order online at “The Rescue.” Those who order the DVD will also receive the Brooklyn Tabernacle Choir’s album, Pray, which features 13 original songs that echo the film’s message of hope, joy and the rescued life.