World renown German evangelist Reinhard Bonnke, whose record-setting crusades led him to be nicknamed “the Billy Graham of Africa,” died Saturday at age 79.

His ministry, Christ for All Nations (CfaN), claims that more than 79 million people came to Christ as a result of Bonnke’s career, which spanned from 1967 until his retirement in 2017. The Pentecostal evangelist preached a prayerful message of Christ’s transforming power while also boasting miracles and healings.

According to his successor at CfaN, evangelist Daniel Kolenda, Bonnkey is a man of prayer and high integrity;

“Those who knew him off-stage can testify to his personal integrity, genuine kindness, and overflowing love for the Lord. His ministry was inspired and sustained by his rich prayer life, his deep understanding of the Word, and his unceasing intimacy with the Holy Spirit.”

A report from Christianity Today, from Bonnke’s largest in-person event, where 1.6 million gathered on a single night to hear him preach in Lagos, Nigeria. CT featured Bonnke and his ministry in an issue the following year, calling him “one of the continent’s most recognizable religious figures.” Historians have said that no Western evangelist spent as much time in sub-Saharan Africa as Bonnke. 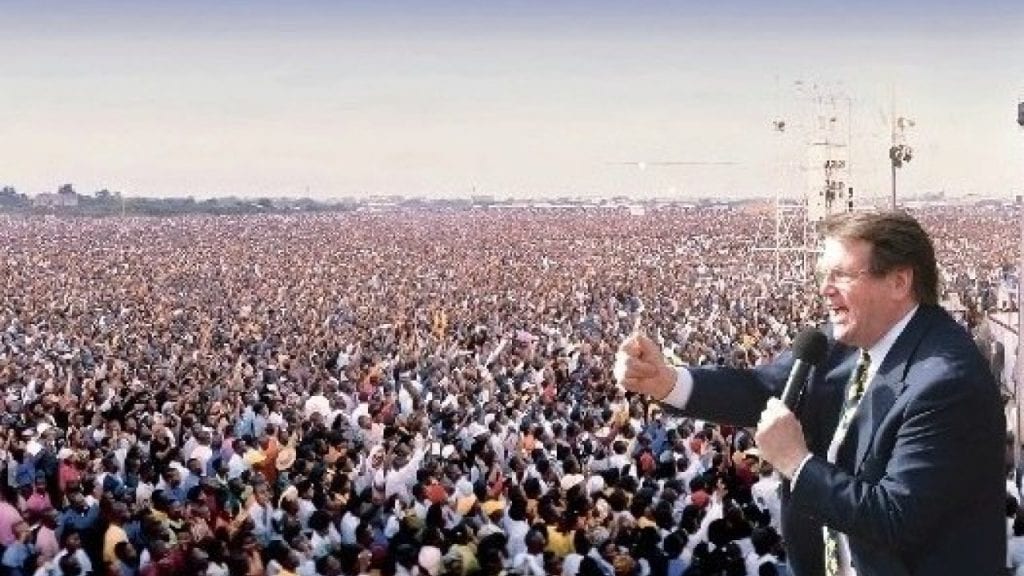 Following his death, many African Christians offered their condolences on Twitter, saying “Rest well” and “Africa will never forget you.” The government of Nigeria stated that President Muhammadu Buhari, who is Muslim, “joins Christendom at large in mourning the passing of renowned evangelist, Reinhard Bonnke, 79, describing his transition as a great loss to Nigeria, Africa & the entire world.”

Kenyan politician Esther Passari shared how “I spoke in tongues for the first time at Rev. Reinhard Bonnke’s 1988 crusade. He picked me from the crowd and arranged a meeting where he prayed for God to use me. I send my condolences to his family and his congregation. Rest In Peace, Man of God.”

His ministry was not without controversy among evangelicals, as CT wrote in 2001:

While some hail him as a spiritual giant, others scoff when he promises miracles and anointing. Critics say the last thing African Christianity needs is more preachers who focus on spiritually shallow events. They say the quality of disciples, not the quantity of the crowd, is the key to reaching Africans. Still, ordinary Africans adore him.

Bonnke himself is as complex as he is controversial. While his crusades are often high in hype and hoopla, the evangelist is a caring pastor, single-minded in purpose and genuine in nature. Both on and off the stage, his goal is simple: to win the heart of Africa for Christ.