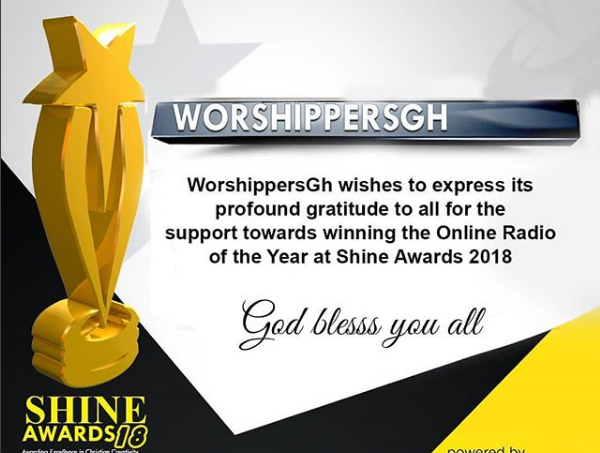 With over 30 categories and winners honored on the night of April 20th at the National Theatre, the maiden edition of Shine Award was a full pack of musical performances and joyful energy. Though not all things went right as far the event night was concerned, this I can say is pardonable, seeing this is the very first edition.

Shine Awards, noted to be an awards scheme that has come to stay, embraces the idea of awarding Christian creativity, hence going deeper into other corners of the Christian Entertainment industry. This award seeks to appreciate great talents and influential personalities in the Gospel music fraternity, people who may never step onto VGMA platform to pick an award.

Congratulation to all other winners in various categories. Kindly view all winners in the other categories below;

Song of the year
Akesse Brempong (God is working )

Artists of the year
Joe Mettle

Personality of the year
Timothy Bentum

Mc of the year
Timothy Bentum

Discovery of the year
Kobby Martey

Comedian of the year
Parrot mouth

Dance group of the year
Worship in motion

Group of the year
Allnyt family

Online radio of the year
WorshippersGh

Poet of the year
Braa Kwaku